Surrealism Exposes Wealth Inequity And Beyond

That is to say 80 people in this world have as much money as their disposal as 1.4 billion people. This gives them a perverse power over the rest that they can exploit. This shocking gap has deep repercussions on our society.

With a wealth gap so wide; there are obvious and tangible issues such as mass poverty and crime. It has one large impact on us that is intangible. We often ignore the fact that the wealthiest people in the world have control over the media. This leads to media manipulation as well as mass manipulation where we are shown exactly what they want us to see.

Here is why wealth inequality is bad for everyone!

Therefore what we think of as our reality could easily be just an image created by this media influence. Reality is the conjectured state of everything as exists, rather than what it appears like. Reality is relative; a beautiful game of perceptions that is real.

We assume it is the 'I' in me who does everything and is responsible for all outcomes. The 'I' takes care of my present and my future. My life revolves around the word 'I'.

What happens when I face the reality?

Am I just a puppet and being managed by politicians, businessmen, and the so called powerful people?

Am I being controlled by corporate owned media?

Reality does not just bite, but it also kills. The artist has intelligently portrayed the sufferings of the poor and the happiness of the rich in his oil paintings, a fine art way to expose the brutality of the real world.

Human beings are gradually turning into puppets and greed is pushing everyone down; there is constant manipulation of the masses by the politicians and businessmen.A Surrealist painter by the name of JJ Banerjee has captured on canvas the huge wealth gap to depict the reality of the world that we live in. 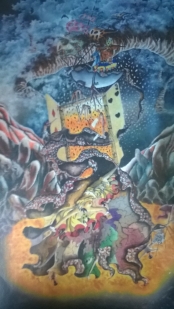 'Musk Seller: A perfidious drama' is one of Banerjee's creations at ShowFlipper. The dark hued landscape shows the harsh reality of the present world in its 39x32 canvas. He has depicted the privileged rich controlling the masses in the form of a dark and gloomy puppet show.

The backdrop is a dark cityscape with vultures flying overhead in hope of feeding on the bodies, which is considered as an ill omen in a typical Indian society. There are hands that are controlling the strings of the puppets and the center of the painting has an emerging hellfire that fails to reach upwards to punish the deserving evil doers.

The painting urges the common man through to rise to the occasion! A battle has been cast by the rich section, to widen the barrier that separates them from the poor. The photo art creates an air of belief amongst every common man to step up and deliver.

Art & reality meet in this nightmarish scenario which cannot be ignored for long. The call to action is made through art.

According to the artist, it is not the quest for supremacy, but equality.

Banerjee has strong opinions about the society. "A man holding power and position, has the ability of feeding us as well as starving us. This makes us helpless enough to bow our head towards them. I want to pass the message through my paintings to people and tell them to fight for themselves and not sacrifice their rights." he says.

ShowFlipper is one such place where every artist might want to be! Be it fabric art, fine arts, abstract art or digital art, if you are not here, you are bound to miss a greater section of audience!

Having effectively captured the ugly truth onto one canvas his other works of surrealism also have similar projections of reality. His paintings on SF Studio possess naked surrealism and have attracted the attention of several art lovers worldwide for the dramatic and explosive messages that they portray.

Banerjee has several other artworks like 'after the atomic war' which shows the depiction of human beings that are distorted and disfigured. Its Surrealism sends across the bold portrayal of what greed, anger, and negativity does to us. (visit here for image.)

'Vendetta of the paradoxic spree' in the Sahara Art section is another creation that is disturbing yet fixating and core shaking. All of his works are a bold display of reality that has the capability to make a person think deep. One cannot help gazing into the depth of the painting. His show speaks for itself and attracts numerous people to collect his work on their screen.

To become a better artist, there is no other better way than to practice your ar

For creators to showcase their art and make money from artwork, the surest and q

Showflipper brings you the most exciting art news from the art world! Stay infor

Expert Advice On How To Blend Soft Pastels

Pastel coloring techniques can be tough to grasp for beginners and newbies.